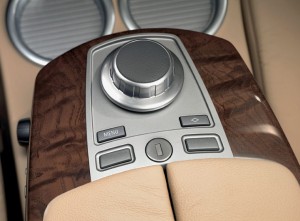 Um, what do I do with this?

I love cars. I am currently in the throes of a mental love affair with a BMW 750Li. I bring this up as a lead in to a very embarrassing story. If you have been reading my blog or know me, you know I am a technologist; for over 20 years I have been working in, on or around technology in some capacity. This new mistress (I don’t have a name for her yet, nor do I know why we assign feminine pronouns to objects like boats and cars) is chuck full-o-technology. In fact, one of the double edged swords of this particular vehicle is a piece of technology called iDrive.

iDrive was conceived to revolutionize the way drivers interact with the ever-increasing stack of technology in vehicles. The idea was to have a single interface that can control every major piece of the automobile from climate to navigation. By simply pushing down, using it like a joystick or twisting in one direction or the other, the driver can easily interact with the full color display in the dash.

This is a REALLY great idea. However, the demographic of these cars is not the same demographic who likes new interfaces, and it has been a black eye of varying color on the BMW line since its introduction. But I was excited about this as I began searching for the perfect car. Hell, I am a technologist. I am purportedly fairly bright. It can’t really be that hard, right?

I recently test drove one of these vehicular temptresses and was mesmerized by the perspective view on the navigation system. The problem I had was that the zoom level was too far out, rendering the view completely useless. I clicked through the menus, looking for a VIEW-ZOOM option or something to that effect. I looked through the SYSTEM settings, I drifted in and out of the NAVIGATION options, I adjusted the view to be 2D. None of this helped. I was about to do the unthinkable.

I was about to read the manual.

Well, we had moved to another veghicle (same model, it just had a rear seat entertainment system which, for some reason, also had a rear seat navigation system display). My son, Nicholas, was fascinated by all of the cool buttons and displays as he loaded up in the back seat for our test drive. My wife and I were busily telling him not to touch anything when I noticed him staring at the rear display of the navigation system. I already knew what was going to happen.

He grabbed the rear seat iDrive interface and twisted it. One direction zoomed in. One direction zoomed out. He smiled with satisfaction as he had figured out how to interact with the system. I can’t help but think that had he known how many times his dad had tried to do that very thing and failed, he would have belly laughed!

I have thought about that incident many times since. Nicholas carried no interface experience into this encounter. He had no bias. He simply evaluated the situation and did what seemed to make sense. In this case, it happened to work. I felt appropriately stupid. I then started to think about how many things I have thought I understood for certain and griped about how complicated the implementation was when realistically, the problem was me.

Moral to this story is to enjoy collecting experiences but also remember to look at problems with ‘fresh eyes.’ There is a reason that strong teams are designed to have fresh eyes throughout the process. Quite often, our bias is our largest stumbling block. It was for me and my use of the navigation system. Thanks to Nicholas for setting me straight.