Walt Disney was a Visionary 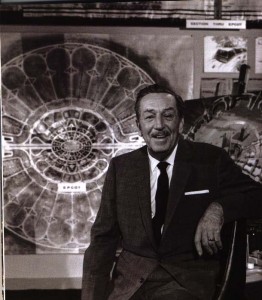 I was at a friend’s house this weekend for a little impromptu BBQ. As usual, the food was outstanding (and plentiful) and the drinks were flowing. Knowing that this would be the case and having a group of very responsible friends, a few of us planned to stay the night.

When I woke the next morning I caught a whiff of something delicious. My friend’s father (who had slaved over the smoker the previous day to provide the BBQ) was now up making homemade Belgian Waffles! As we all received our order (complete with our choice of fillings), Marv (the chef) scurried off to fetch his laptop.

As we sat around eating our breakfast I watched Marv setup his laptop on the kitchen table and could feel his excitement. He was starting a Skype session with his wife who was visiting their grandchildren in Michigan. As the video conference started, various members of the family were pulled into the video conference and were able to share in the visit and generally enjoy a morning together.

So what does this have to do with Walt Disney? One of my more vivid memories of Disney World as a child (I grew up ion Florida so I practically lived there) was a scene from Epcot Center in a ride that used to be called Horizons (yea, I know that it has been dramatized elsewhere earlier. I am not a Disney historian. This guy is and this article on Horizons is awesome!) . It showed a family in the Desert colony chatting with their other family that was located in the underwater colony and the space colony. They were using video holograms but essentially, this was the same thing. I remember vividly thinking as a child how cool that would be.

Was Walt the first to imagine this? No. But the scene evoked such a vivid recollection that I had to give him credit. What does this have to do with my blog?

I have been a technologist for over two decades. I am a huge fan of technology. Sadly, many folks think of technology as cumbersome. A tax. An expense.

I have always seen technology as empowering. It is there and created to make lives easier or better. Whether it is an automated framework for deploying operating systems for a multi-national company which will get them to the latest technology, reduce their costs and improve their productivity in a cost effective way

Allow a granddad to talk to his granddaughter in Michigan.

Technology is awesome. Visionaries drive it.

Thanks Walt. (and thanks Marv for the BBQ)